THE DRILL SERGEANT: Uranex Limited (ASX: UNX) has reported encouraging progress and observations from its 2014 exploration program at the company’s Nachu graphite project in Tanzania.

Uranex boasted the size and potential of the Nachu project provides it with multiple extensive graphite zones from which to choose from.

The company explained it simply ranked higher-priority areas based on depth to mineralisation, intersected thicknesses and graphitic carbon grade and flake size potential.

This resulted in the identification of focus areas within Blocks B, D, F and J for the initial JORC resource, which is due in November 2014. 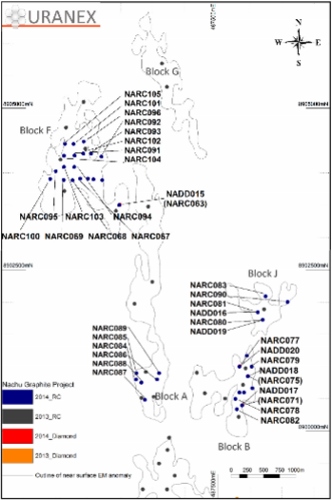 The recent drilling has confirmed graphitic schist and potential mineralisation is present in multiple horizons throughout the Nachu graphite project.

Key downhole intercepts from each Block drilled in the latest round include the longest graphitic intercepts Uranex has drilled to date.

Block J – NARC090
Completed to 91 metres at -60 degrees towards the west through the eastern limb of a shallow easterly dipping conductive panel as identified through EM modelling. The drill hole intersected 66 metres of graphitic schist with visible graphitic flakes from surface.

Block B – NARC078
Completed to 102 metres at -60 degrees towards the east through the western limb of a shallow westerly dipping conductive panel as identified through EM modelling. The drill hole intersected 40 metres of graphitic schist with graphitic flake from 20 metres downhole.

Uranex explained samples from the current drilling program have been delivered for laboratory analysis on a weekly basis with initial assay results expected by the end of August with remaining analysis for initial studies expected to be completed in the period to the end of September.

“Despite a slow start to our drilling campaign, we have recovered really well and we are seeing some exciting results,” Uranex CEO Rod Chittenden said in the company’s announcement to the Australian Securities Exchange.

“With mineralisation beginning at or near surface Nachu is showing all the signs of a world class deposit.

“We look forward to further observations and assays in the coming weeks as we work towards our maiden JORC resource.”