THE INSIDE STORY: S2 Resources (ASX: S2R) celebrates its second anniversary this October – just as the Northern Lights, aurora borealis, reappear over Swedish Lapland to rejoice in their own electrically charged skyward festival. By Margie Livingston

In just two short years, S2 Resources has established a strategic land holding in Scandinavia, achieved exploration success across its projects and has remained well positioned to fund further exploration and expansion in its quest to discover the next ‘Nova’.

With a shareholder base and management team established on the back of Sirius Resources’ Nova success, S2 feels the weight of expectation, and believes Scandinavia may well be the region that contains terrific opportunity and the next noteworthy result for investors.

The company’s current priority is its Scandinavian projects where it expects better outcomes per drilling dollar spent.

“We believe, that at the current time, our drilling dollars will be more intelligently spent on the projects in Sweden and Finland, rather than Western Australia, because there are numerous targets with surface or near surface clues” S2 Resources managing director and CEO Dr Mark BennetThe Resources Roadhouse.

S2’s exploration has advanced with positive drilling and geophysical results at the Bjurtraskgruvan and Skaggtraskberget VMS prospects within its 100 per cent-owned Skellefte project in Sweden.

The last prospect drilled at Bjurtraskgruvan during the northern hemisphere winter returned the best intersection yet and an electromagnetic survey suggests it might continue for another 450 metres down plunge.

The new intersection is considered close to true width, and demonstrates the Bjurtraskgruvan VMS system extends for at least 450m down plunge from its outcrop, remaining open down plunge.

A downhole electromagnetic survey identified a conductor centred approximately 30m to the east of the hole, suggesting the intercept may be adjacent to more massive sulphides.

In addition, the results of a new fixed loop electromagnetic (FLEM) survey defined a large plunging conductor extending a further 470m down plunge from this hole, for a total plunge extent of 900m – so far.

The VTEM anomaly highlights the up-plunge near surface projection of the VMS system, but FLEM better indicates the potential size, extent and position of it at depth.

S2’s drilling and geophysics confirms the Bjurtraskgruvan prospect comprises an elongated shoot which represents a substantial volume of mineralised material.

“The focus of future drilling at Bjurtraskgruvan will be to define its limits and identify any higher grade sweet spots within the overall system,” Bennett said.

Meanwhile, at Skaggtraskberget, a prospect located 4.5 kilometres west of Bjurtraskgruvan, deeper drilling represents an opportunity where S2 has confirmed the presence of a 350m long mineralised zone containing elevated levels of silver and will continue to assess and explore in this world-class VMS belt.

Drilling will recommence in Sweden once the spring thaw is completed with Skaggtraskberget likely to be the first drilled in the summer drilling campaign.

With ground being exposed by melting snow, various targets and prospects in Sweden and Finland will be explored using surface prospecting.

Two large new exploration licences surrounding granted licences at Nasvattnet and Tjalmtrask have been applied for and surface prospecting will include searching for the source of the clusters of mineralised boulders at these two prospects.

In addition to applying for exploration licences in Sweden, S2 has been increasing its tenure in the Central Lapland Greenstone Belt (CLGB) in Finland following the recent discovery of outcropping high-grade gold mineralisation at the nearby Aurora zone of the Risti gold prospect, owned by TSXV-listed Aurion Resources.

This discovery reaffirms S2’s view of the CLGB being a potentially highly endowed but under-explored gold province.

The company believes its focus on the Scandinavian region deserves a strong human resources presence to ensure effective management of exploration programs.

“S2 is fully committed to its Scandinavian projects and as such three Perth based geologists have relocated to northern Sweden,” Bennett explained.

“This is a direct reflection of our commitment to exploration in the region and managing programs meticulously and expeditiously.”

With the northern hemisphere being a focus for S2 it seems the name of its Western Australian asset may have taken inspiration from the north as well.

‘Polar Bear’ is a large unexplored holding in the heart of the WA goldfields, on trend from major gold mines.

To date, 348,000 ounces of gold resources have been delineated at Baloo and Nanook.

However great the potential of Polar Bear it is not, at this stage, a priority.

“While we focus on projects in Finland and Sweden the company could entertain ways of divesting Polar Bear” Bennett said.

“As a junior resource company, we are always looking at ways to grow and add value for shareholders.

“Our focus is on mainstream commodities such as gold and base metals in politically stable jurisdictions such as Australia and Europe.

“We constantly look at opportunities with low sovereign risk and well developed infrastructure, which both regions have.

The Fraser Institute’s 2016 annual survey of mining and exploration companies (published February 2017) determined the top jurisdictions in the world for investment based on the Investment Attractiveness Index, which takes into consideration both mineral and policy perception, are Saskatchewan, Manitoba, WA, Nevada, Finland, Quebec, Arizona, Sweden, the Republic of Ireland and Queensland.

“We like North America as a jurisdiction and Nevada in particular, as it is a prolific gold district,”Bennett enthused.

“There is huge production and resources in the area with 10, 20, 30 million ounce deposits and more big deposits still being found.

“Our shareholders would obviously like S2 to discover another Nova, something big, and as a Board we aim to find an elephant rather than a tiddler.

“To do that, our search for assets to complement and increase our portfolio, which hopefully leads to a large discovery, is an ongoing process and one that is global.”

S2 is well positioned to achieve this objective with a highly successful team of explorers, a breadth of corporate experience, a portfolio of highly prospective and strategic ground and a strong balance sheet.

“Our Scandinavian prospects are exciting and we are fortunate to be in a position of having the cash to be able to seriously consider acquisition or joint venture opportunities,” Bennett said.

“Our objective is to find the next big prospect – it might be next month or it might be a few years, but we are focusing on that.”

As the mysterious phenomena of the Northern Lights dances in the skies over the northern magnetic pole, perhaps it will shine some magic over S2’s current and future prospects, leading to that next phenomenal discovery. 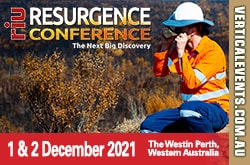