THE BOURSE WHISPERER: Latin Resources (ASX: LRS) has announced the signing of a binding term sheet, by its subsidiary company Peruvian Latin Resources (PLR) for the sale of the Mariela concessions to Total Genius Iron Mining (TGIM).

The term sheet confirms the sale by PLR of five concessions in Southern Peru, known as the Mariela concessions to TGIM for a total consideration of US$2.5 Million. 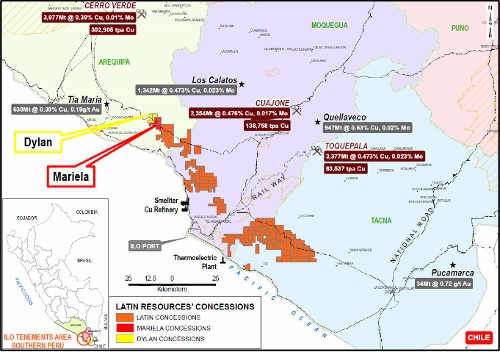 Payment for the sale will occur across two tranches: the first tranche of US$1.5 million will be paid in December 2013, upon receiving shareholders’ approval at the Latin Resources AGM in of November.

The second tranche of US$1 million will follow in February 2014.

Latin indicated it is planning to use the funds from the sale to further its exploration activities in the Ilo region and to also evaluate and maintain its Guadalupito project, as well as keeping an eye out for other opportunities in
South America.

“We are pleased to have finalised the terms for the saleof Mariela,” Latin Resources managing director Chris Gale said in the company’s announcement to the Australian Securities Exchange.

“The Mariela concessions, following completion of this transaction, will have provided funding for the company of over US$11 million dollars over a two year period that has allowed the development of our flagship project Guadalupito and funding of our subsidiary Peruvian Latin Resources.”