THE DRILL SERGEANT: A release from Impact Minerals on Day One of the Diggers & Dealers Forum in Kalgoorlie informed the crowd of varying widths of sulphide mineralisation intersected at the company’s 100 per cent-owned Commonwealth project north of Orange in New South Wales.

Impact Minerals said the sulphide mineralistaion had been encountered in all six diamond drill holes it has completed thus far in a follow up drill program at the Main Shaft and Silica Hill prospects within the Commonwealth project.

The company expects first assays by the end of August, which it said could offer the potential for a material increase in the Inferred Resource for the project.

At Main Shaft four diamond drill holes have been completed to test for extensions at depth and along trend from the previously identified gold and silver-rich massive sulphide lens.

“All four holes intersected varying widths of massive and/or semi-massive sulphide mineralisation comprising between 50 per cent and 70 per cent sulphides dominated by thicker layers of pyrite interlayered with up to 15 per cent fine grained zinc sulphide (sphalerite) and up to 5 per cent lead sulphide (galena),” Impact Minerals said in its ASX annpuncement.

“In a few places there are also zones with thick layers of sphalerite with lesser galena and pyrite.”

At Silica Hill two diamond drill holes were completed to test down dip and along-trend extensions to the previously discovered high grade gold and silver mineralisation.

“Both of these holes demonstrate a continuation of the Silica Hill mineralised system for at least 200 metres along trend, although it is much narrower in Hole 080 than previous drill holes along the southern trend of mineralisation,” Impact said.

“The mineralisation at Silica Hill is still open in all directions and further deeper drilling is required.”

Impact has more detailed interpretation of these drill holes from both Main Shaft and Silica Hill in progress and these will be fully assessed upon receipt of the assays. 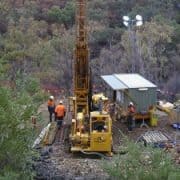