THE BOURSE WHISPERER: Golden Rim Resources has gathered high-grade gold results from two new artisanal mining sites that have been identified within the company’s Sepola project in western Mali.

Golden Rim collected a total of 40 rock samples from the artisanal sites, which returned values greater than 0.5 grams per tonne gold.

One of these sites is at the Mogoyafara South prospect where Golden Rim has previously defined an Inferred Resource of 3,463,000 tonnes at 1.48g/t gold for a total of 165,000 ounces of gold, which remains open along strike and at depth.

The new artisanal mining activity at Mogoyafara South commenced in late March 2012 and is located in the eastern portion of the prospect area, in the vicinity of trench T17, from which the artisanal miners are exploiting gold-bearing, limonitic quartz veins originally exposed in the trenching.

The new grab rock chip samples from this veining in the vicinity of T17 returned gold values including:

The samples were collected from outside the current resource area where the company expects further drilling will extend the resource and potentially link the two resource areas in the Eastern Zone at Mogoyafara South.

The second new artisanal mining area is located almost 3km from the Mogoyafara South prospect and has been called the Bahe workings. 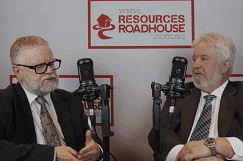