The Zeta NE prospect is located in the Boseto Zone of the Kalahari Copperbelt in north western Botswana approximately 11 kilometres from the company’s 100 per cent-owned Boseto copper project concentrator.

This is the first estimate of Mineral Resources at Zeta NE and is based on drilling Discovery conducted on 14 drill sections spaced approximately 400 to 800 metres apart. 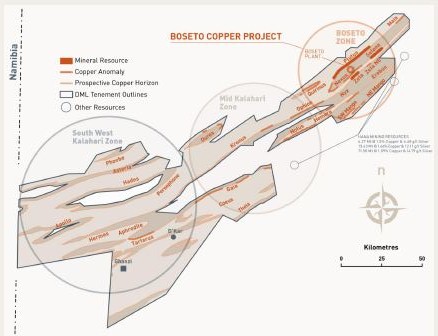 The estimate of Inferred Mineral Resources in each of these domains is reported for mineralisation below the base of oxidation.

–    Footwall Mineralised Domain 11.1 million tonnes at 1.2 per cent copper and 23 grams per tonne silver; and

“This first Mineral Resources estimate for Zeta NE represents another step towards increasing the life and the scale of the Boseto copper project,” Discovery Metals managing director Brad Sampson said in the company’s announcement to the Australian Securities Exchange.

“Further evaluation of the open pit potential at Zeta NE is planned for the current half year to determine the best positioning of Zeta NE in the Boseto mining schedule.

“Further drilling is planned to assess underground potential at Zeta NE in early 2013.”

Discovery has interpreted the main footwall domain to have a strike length of approximately 5km that has been intersected by drilling at depths between 10 metres and 230 metres below surface.

A discrete area containing copper grades in excess of 1.5 per cent copper exists within the footwall zone and remains open at depth.

At the hangingwall domain the company has interpreted strike length of approximately one kilometre it has intersected between 10m and 70m below surface.

Further evaluation of this potential will be undertaken in fourth quarter of this year.