Cassini Resources described the hit as the, “second significant intersection of nickel and copper mineralisation at the Yappsu prospect.

The current drilling is beibng funded as part of the Earn-in/JV Agreement Cassini has with OZ Minerals (ASX: OZL) where the JV Partners are currently undertaking a Pre-feasibility Study on the Nebo-Babel deposits as well as a regional exploration program.

Including the barren interval between the two main zones, the diluted intercept is 80.3m at 0.44 per cent nickel, 0.44 per cent copper, 0.02 per cent cobalt, 0.32g/t PGE and 0.09g/t gold, which is the thickest intercept of mineralisation the JV has drilled to date.

“The thickness, grades and continuity of massive sulphide mineralisation, which has been intersected in almost every hole at Yappsu drilled to date, indicates the overall potential for the system to host additional significant accumulations of massive nickel sulphides,” Cassini Resources said in its ASX announcement.

The intercept in CZD0079 complements an earlier result from CZD0076B, confirming the company’s belief that historical drill holes had not intersected the core of the mineralised system. 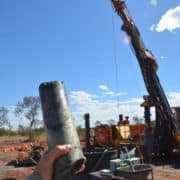